Americana Beer Company is celebrating its first holiday business season by giving back.

The brewery will hold a holiday giving campaign, Fight Like Banks, throughout December to benefit Ronald McDonald House Charities of Greater Charlotte.

Head brewer Darren Tucker and his wife, Lindsay, recently welcomed their first grandson, Banks. He was born three months premature and has already been through a lot in his life, but even with the odds stacked high against him, he just keeps fighting.

“He’s an inspiration to all of us, and it’s incredible to see him growing and beating everything thrown at him every single day,” Tucker said. “After months in the NICU, we’re excited to say that he will be coming home soon.”.

During Banks’ time in the NICU, the Tucker family has been staying at Ronald McDonald House to be close to the hospital 24 hours a day, seven days a week.

“Ronald McDonald House does so much for families who have loved ones with extended hospital stays,” Americana co-owner Zach Hinschberger said. “We just want to do something to give back as a thank you for everything they do.”

“Customer donations will support families just like the Tuckers who are going through some of the toughest times of their lives as they care for their loved ones in the hospital,” Cubbedge said. “RMHC of Greater Charlotte provides the comforts of home to hundreds of families each year. Whether it is a hot shower, a comfy bed, a homecooked meal or a cup of coffee, your donations will help to keep families close when they need it the most.”

In addition to accepting cash and can tab donations, the brewery will release its new Fight Like Banks Pilsner on Dec. 10 during the Downtown Monroe Holiday Pub Crawl. It’s a clean, crisp pilsner brewed with malt from Carolina Malt House, German hop varieties and Americana’s favorite lager yeast strain. A portion of proceeds from every pint sold will also be donated to Ronald McDonald House as part of this campaign. 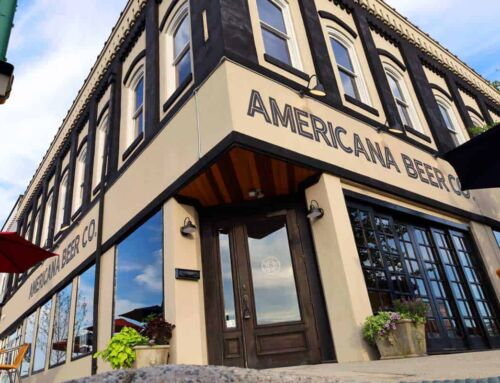 AMERICANA IS COMING TO MONROE, NC!